So yesterday was election’s day in Portugal. All of the good portuguese people went to give their opinion on which party should rule for us. I’m not a good portuguese but I got up and voted. I woke up complaining about life and it lasted until I put the cruce where I wanted to and left to go shopping.

Why did I go vote? Because not voting is as bad as not breastfeeding your newborn. If you’re a mother you’ll get what I am saying. You become the black sheep, you get stained. I should participate in the voting process because my right to do so was won by our ancestors. Even more if I am a woman. It’s like by not voting I am stabbing womenkind in the chest.

And I shouldn’t vote. And I tell you why.

I don’t know anything about politics. I’m sure I’ve already told you this. It’s true. I’ve also spent all the time between one voting year and another, NOT learning anything about the parties and NOT forming my opinion on what I think should be right for my country. I have not won the right to vote.

Why didn’t I vote blank?

Voting blank is giving an opinion. It’s saying that you know all the candidates and you think that none is worth it. I actually think they all look-alike but I feel I don’t hold enough information to stand up and say this.

Why did I vote?

This year I decided to vote. I decided that this will be my first step to change my attitude. So I found a party that in general stood up for things I appreciated.

My boyfriend was listening to my ramblings and asked what my solution would be. My solution was to have someone test your knowledge beforehand. They would ask you if you knew the names of the parties in the campaign and what they stood for in general. If you could answer this, you were free to give your opinion. If not, please study and come back.

By the look in my boyfriend’s face I know this wouldn’t be a well received idea, but that’s my opinion. And I would fail the test. I don’t understand all the hype around 50 shades of gray.

I haven’t read it, and most of all after reading and listening to some things about it, or worst, having the amazing idea of seeing the movie trailer, I refuse to ever read the book. 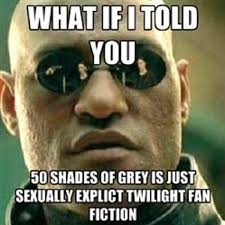 We live in extremism.

It had became such a normal thing that we moved it to such mundane things as food and exercise. Nowadays we have 2 trends that scare me:

The ones that make no exercise at all and eat on a crazy way:

And the ones that go to the gym at any given moment, and count the calories of everything that they eat.

There’s something called moderation!!!! Please use it!

I’ve spent so much time wandering online and searching for strange news, that when they appear on the mainstream media, I don’t even acknowledge them.

It seems that there is a new unauthorized biography (all the interesting ones are unauthorized) of David Cameron that claims between other things that he smoked marijuana and that he was part of a weird ritual in which he inserted a part of his anatomy on a dead pig’s mouth (yeah, think sexually).

How does it matters?

And about the drugs, being a teenager in the 70’s 80’s, it was only him certainly.